tasting ‘a note in the margin’

I had no intention to write a post this soon, but felt the need to after reading this book.

A Note in the Margin by Isabelle Rowan 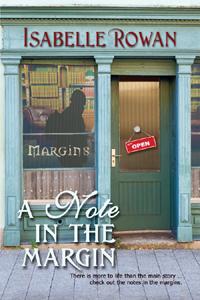 John McCann, a man who judges life by the tally of an accounts ledger, has a supreme goal in life: To achieve, live, and enjoy the rarified executive lifestyle. But he’s encountered one problem:

The migraines are going to continue to get worse unless you make some major changes in your lifestyle. What you need is a ‘sea change’… Perhaps buy a nice little business in the country, settle down, something easier to occupy your time…

While John knows the doctor is right, he just can’t resign from the job he’s fought so hard for. He decides the sacrifice of taking a year’s leave of absence won’t interfere too much with his plans, and so he finds himself running Margins, a cozy little bookstore, with the help of the former owner’s son, Jamie. John expects to put in his year, get his stress under control, and then get back to business.

What John doesn’t expect is how Margins and its denizens draw him in, particularly the quiet, disheveled man who takes refuge in the old leather chair in the second-hand book section. John’s plans for an unattached year of simple business crumble when he meets David and is forced to reevaluate life, love and what he really wants from both. John and David are forced to come to terms with their pasts as they struggle to determine what possible future they might build together.

It’s about a gay bookstore owner. Of course, I picked it up. *grin*

Dislike~ John was not particularly likeable at first and I wasn’t certain I was going to enjoy the book because I thought he was such a stupid git. However, his character grows as the story progresses and the reader comes to know and understand him.

Like~ Further to the above, Margins has excellent character development all round, in particular the complex protag that is David and the way he copes with his past and present in order to have a future with John.

Dislike~ I was a bit concerned about how soon John and David came together, especially with regard to David’s situation, but a large part of the book was about their day-to-day lives and how they worked to build a relationship together. I thought this was a terrific approach.

Like~ When I finished Margins, I felt privileged to have shared the journey with John and David. I think this was due primarily to the sensitive and thought provoking way the author dealt with the themes of homelessness, mental illness and personal growth.

So, what I think:

I really, really enjoyed this book and would recommend it to anyone who likes a meatier romance. I will definitely be reading more from this author.

Reads, rants, randoms & R+s. You've been warned. BTW, don't follow me if you're a GLBTQQphobic wanker. It won't end well. For you.
View all posts by Kris →
This entry was posted in contemporary, isabelle rowan, m/m, tasting. Bookmark the permalink.

14 Responses to tasting ‘a note in the margin’