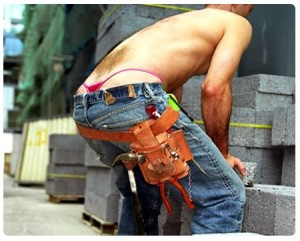 Srsly. It’s like I have a gift or something.
The results are in and I gotta say I’m a bit disappointed in y’all (check out my Texan accent that I’ve been practicing). I was really hoping that the Trekkies would win the day, but alas it was a total failure. 😦
Anyways the choices that got the most votes are as follows:
1. the setting ~ a building earmarked for demolition

2. some background to one of the main protags ~ one is sucked in to doing a favour for a friend

3. another character/s ~ a lavender-haired matron in a twin set and pearls, who is constantly pinching butts

4. a conflict ~ one has a panic attack whenever he sees red M&Ms

5. an object/phrase to be mentioned in the story somewhere ~ a split trouser seam revealling a pink, lace g-string

What the hell a bum pinching granny would be doing on a construction site is beyond me.

Lucky for you lot it’s not up to me to write your story, but Mia Watts.

Hmmm. Now that I think about it, I’m pretty sure that she’s the lucky one. *mwahahahahahaha!*

Reads, rants, randoms & R+s. You've been warned. BTW, don't follow me if you're a GLBTQQphobic wanker. It won't end well. For you.
View all posts by Kris →
This entry was posted in a choose your own m/m story, mia watts. Bookmark the permalink.

30 Responses to mia’s story: your choices