Some of you might recognise the next guest blogger in this series from goodreads… the fabulous Rossy! *g*
Rossy and I have been chatting on and off for a while now and I’ve been known to visit her bookshelves a time or two for ideas about what yaoi to read next.
*****
Gah, I have not introduced myself since I graduated school, so here are some vital things everyone should know. I’m a fujoshi, who tends to cosplay while home alone sometimes. My only credentials are the 6 or 7 years I have spent reading manga/manhwa, and watching anime. Take my recommendations with a grain of salt that you may not feel the same way. Oh, and I think American comics totally suck, unless you’re a teenage boy who doesn’t know where they originated from! *crosses arms and awaits angry mob*

This is one of my all time favorites. *Kris: Mine too!* Although very dramatic and filled with angst, I feel the mangaka is able to balance it with the strong romance shown between the main characters. The plot is quite engaging as well. Revolving around how these actors struggle in the entertainment industry.

The art is gorgeous in my opinion and very sensual. Nitta sensei knows how to truly mix the physical pleasure with intense emotions in her drawing. The intimate moments are not just steamy, but the characters’ feelings are noticeable.

I have read 13 volumes so far and have yet to get bored, if anything I get anxious awaiting every chapter release. I can’t believe that once I start reading the 14th volume, there will be no more. Yet I feel that it will be closing this manga on a high note. My enjoyment may have been influenced of course by my mood at the time, and the type of yaoi I enjoy. I recommend it if you’re in the mood for over the top drama, yet passionate exchanges.

Boku no Koe (Sound of My Voice)

Blurb: A lifelong dream of fame and fortune has been the driving force of Wataru Jouchi’s entire life. Now, after much self-doubt, he’s decided to fulfill his destiny and become a voice actor for anime videos. At first, he is thrilled to discover that his long-lost friend, Renji Kazama, is considered a top star in the industry. But Kazama does not seem at all pleased about their unexpected reunion.

This series features four main characters, this time as seiyu. One is an older couple, in which the romance develops slowly with an underlining tension. The other is about a younger couple and the relationship very chaotic, from the very beginning. Sensei seamlessly illustrates both relationships by exploring the meaning of what it is to belong and be loved.

There are also an array of side characters that in my opinion have yet to unfold. As per Nitta sensei’ trademark the art is very appealing to the eyes.

Blurb: Yoshinaga’s genius and his gift for political maneuvering have helped him ascend to the higher spheres of the Ministry of Foreign affairs at an early age. As for Shiraishi, the prestige of his family as well as his dedication to his job has also led him to an early career in diplomacy. Yoshinaga is Shiraishi’s future brother-in-law as he is soon to be married to his sister. When the two meet in Thailand, a stunning tale of love unfolds.

Like all of Nitta’s works, this is another great story not just filled with sex and pointless angst. It revolves, as the title suggests, around foreign ministers and politics. The theme is not for show but deeply delved into. I became engrossed in this series from the first chapter. The plot offers a lot of character development and a highly tense, yet complicated relationship dynamic. The officials are all yet to be revealed and what their relationship/association brings will be interesting to read as the series progresses.

Take the blurb to heart because the cheating is not implied, but a focal point. Neither one of the main characters try to color what they’re doing as anything other than what it is, which cements a very realistic view in Asian society. I have yet to find the proper way to describe the intimate scenes, without sounding like I’m gushing, so just get the books and see for yourself. Just know that there is one particular main character that will make you want to lick him up! LOL

Talk about bishies! *stares at the pretty drawing*

Blurb: The mafia threatens Ewon into working for a loan shark, where he’s forced to run dangerous errands for no pay. The culprit who doomed Ewon to this life is none other than Jiho, Ewon’s jealous ex who still burns at Ewon’s infidelity. Their gang leader Mookyul, with movie-star good looks and the bizarre, drunken habit of biting people on the neck, takes a keen interest in his attractive new errand boy. Will Ewon be able to survive the violent underworld (not to mention the constant sexual harassment he must endure) as an underling of Mookyul?

I really am enjoying the whole action in the yaoi genre these days. This one is a bit lighter though, infused with humor.

Like the title I was totally captivated by the relationship between the two main characters and how it will all unfold. This is unusual for me because it’s shounen-ai and has pretty much every cliché known to man in the plot, i.e.: blackmail, fake dating contract, promises from childhood, the yakuza and love triangles.

This series is not for everybody though. The seme is not a very likeable character and the only thing that saved him in my eyes was his past. Which you have to read further than the 1st volume to find out. The uke is not better either, as he used to cheat on all his past lovers, but he’s so emo that I forgave him everything. I recommend it only when you’re in the mood to be entertained with a light hearted story.

Blurb: Han Sae Lee is every girl’s dream—tall, dark, and handsome with a whole lot of attitude. He knows he’s the catch, but right now, he’s interested in catching a brazen, blond brat and teaching him a lesson or two… WAIT! How can one skinny (but very cute!) boy with sticky fingers (stole Han Sae’s wallet when they first met) give him the run-around so easily? There’s something about Moto that makes Han Sae see red—and not necessarily with anger.

Somehow, Moto has entered Han Sae’s life and shows no signs of leaving. What are Moto’s motives for befriending the “prince”? How far can this friendship go? These questions plague Han Sae as Moto becomes more important to him than he wants to admit. Looks like every girl’s dream man has some growing pains to go through… 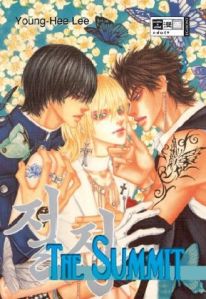 I have to say that when it comes to shounen-ai, manhwas are really different from mangas. The intimate scenes are more expressive and intense. With the drawings alone you can tell a difference between Korean and Japanese culture. The clichés are also toned down a bit and instead twists are inserted into the plot. The drama is very high, I was literally glued to my seat from the very beginning. Thankfully it’s not overly done that I needed any breaks in between chapters, just that you can anticipate there will be a lot of things to deal with between our main couple.

I believe I have 2 volumes to finish, but so far am on my toes. These characters are highly complex. You have Moto(uke) who is so emo I want him for myself; yet he has an elephant size baggage called Itan (psychological nightmare, in my opinion). He’s a little less timid than we’re used to in ukes and not afraid to get what he wants. Then you have Han Sae, who in my eyes can do no wrong, even when he acts like a bear! I love that he knows how much to push and give with Moto.

Manhwas are not for everybody. Sometimes you have to read in between the lines or view the characters behavior from a different perspective than we are used to, in order to “get” the true meaning behind it.

**Hmmm, it looks like my post needs a guidebook. I did warn Kris that I was going to have a pitcher of margaritas tonight though. *Kris: It’s true. :D* I’ll be nice and give you a nice linky here in case anybody gets lost.

Besides being friendly when she’s tipsy ;), Rossy has some terrific recs and I know I’ll definitely be picking up the 3 I haven’t yet read…

Reads, rants, randoms & R+s. You've been warned. BTW, don't follow me if you're a GLBTQQphobic wanker. It won't end well. For you.
View all posts by Kris →
This entry was posted in guest post, m/m, m/m graphic novel appreciation series, rossy, yaoi. Bookmark the permalink.