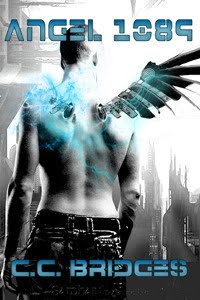 The Blurb:
When this deal breaks, Heaven will fall.

Catching two demon burglars is routine for Gabriel 1089, who’s one cog in an army of cybernetically modified humans protecting the sky city of Heaven. Until two turns into a twenty-demon ambush. When he wakes up, he’s missing his network-enabled halo—and one of his metal wings.

The down-level junk dealer tending Gabe’s wounds has hands that spark nerve endings he never knew he possessed. But for an angel cut off from Heaven, an attic in Old Trent feels more like a trap than a sanctuary.

Demons on his doorstep are nothing new for Jeff Werth. Ever since they saved his daughter’s legs, they’ve been calling in their marker. In exchange for his services—nursing Gabe back to health so they can use him as a pawn in their war with Heaven—they’ll consider the debt paid in full. Except having a powerless angel at his mercy feeds a rising desire that has him rethinking the deal.

Then the de-haloed Gabe begins having dreams that become visions…then memories. Until he’s not sure whose side he’s on. Heaven, or the simple family man who healed his broken wings…and made his heart whole.

Why I bought it: The blurb. I like futuristic, post-apocalyptic fic.

Dislike~ A BigM. Me, I can take or leave the BigM depending on, like all themes, tropes, whatevers, whether the author has (a) convinced me it was relevant to the development of the plot and characters and (b) it was believable. In this book, the reader is aware of the reason for the BigM from the outset. I have to admit I got a wee, bit tired of some of the angsting associated with it as well as the wait for the reveal. All in all, though, it wasn’t a huge deal for me because I got more caught up in other parts of the story.

Like~ The author’s take on the angel versus demons mythology set in a futuristic world that has been ravaged by natural disasters and is now dominated by corporations *deep breath* was intriguing and well crafted. Indeed, I thought this was pretty, damned impressive considering how convoluted the world building could have been with all the tech, etc in it.

Dislike~ More of a warning~ Some readers will see the word ‘corporations’ above and roll their eyes because what’s spec fiction without some sort of evil *insert name of organisation here*? (cont. below)

Like~ I say poo to them cos I love my individuals-rebel-and-battle-the-big-baddies stories. Hello, Star Wars anyone?! They’re awesomesauce and I shalt not hear any naysayers! Oh, and I reckon the mythological overlay provides a unique enough interpretation of this theme to shut up any doubters. There are also a few twists and turns in the plot which should keep readers on their toes.

So, what I think: I will definitely be reading more of this series. I think that says it all really. 🙂

Reads, rants, randoms & R+s. You've been warned. BTW, don't follow me if you're a GLBTQQphobic wanker. It won't end well. For you.
View all posts by Kris →
This entry was posted in c c bridges, futuristic, m/m, m/m romance challenge 2010, spec fiction, tasting. Bookmark the permalink.