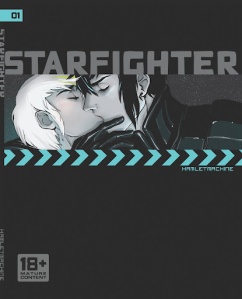 The Blurb from here:
STARFIGHTER is a sci-fi boy’s love story that follows two soldiers, Cain and Abel, as they fight oncoming enemies, themselves, and the greater forces that work against them.

Why I bought it: Kassa recommended it in her guest post for the m/m graphic novel appreciation series. I used my Google Fu and discovered the author/artist was going to be at Yaoi Con too so I made it my mission to stalk her when I was there. Needless to say, I now own an autographed copy of Chapter One. Woo and hoo. *grin*

Dislike~ This was me after I’d finished Chapter One: “What the hell. It’s over already?? And on a cliffhanger ending?! Dammit! Oh, but it’s a webcomic. Cool.”

Like~ Dark, dark, dark, dark, DARK. Everything about this is dark from the artwork, to the setting, to the characters, to the themes and, as the reader finds out on the very last page *dammit!*, to the motivations. I LOVED that about Starfighter. I’ve no doubt there will be some readers who will find this off putting, especially with regard to the artwork. However, I think its austereness made it even more compelling.

Dislike~ More of a warning~ A few people have mentioned Starfighter reminded them of Broken Boundaries by Evangeline Anderson, which is a story readers tend to love or hate. To be honest, any similarities between the two didn’t even occur to me until the comment was made. This could either be because I suffer from a disease known as obliviousitis or because I never got any sense of the sexual confusion or non-con central to Broken Boundaries from my reading of Starfighter. I will be interested to see what others who’ve read both think about this aspect.

Like~ This might seem a bit silly, but I was really, REALLY pleased Abel didn’t turn out to be a total wimp. Yes, he was uncertain and lacking self-assuredness, particularly when compared to the dominant and aggressive Cain. Yet, he wasn’t a pushover. I know I wouldn’t have enjoyed this graphic novel anywhere near as much if Abel hadn’t stood up to Cain when it mattered.

So, what I think: A must for all those who are fans of dark fantasy/ sci fi/ spec fic. Go read Starfighter now!

Reads, rants, randoms & R+s. You've been warned. BTW, don't follow me if you're a GLBTQQphobic wanker. It won't end well. For you.
View all posts by Kris →
This entry was posted in comic/graphic novel, hamletmachine, m/m, sci fi, tasting. Bookmark the permalink.