I don’t know about other people who work for themselves, but I tend to take on quite a few projects because I’m always a bit afraid of what could happen around the corner. Ordinarily I can cope however this time, just after the madness of the end of financial year, I was struck down by what doctors have been calling the 100-day flu. Needless to say that deadlines have come and gone, been rescheduled and then gone again. Now I am struggling to play catch up as well as deal with the end of year rush before the Christmas hols.

I’ve also had a few family dramas, but the absolute worst thing that has happened to me was the passing away of my girl.

God, it was quick. I went to feed her dinner one evening and when she didn’t come, went looking for her, eventually finding her collapsed under my bed. I frantically rang my Mum, who came and then drove us to a late night vet clinic. Mum was so good trying to keep my hopes up, but I already knew.

I knew from the time I had found her up to the time the vet told me what she thought had happened – a whole 1 1/2 hours – that I would be having to make the most difficult, yet the absolutely right decision for my girl. I knew that, as much as I wanted her to live, it would be a choice for me, not for her – so I chose for her to go to sleep in my arms with as little suffering as possible.

I was devastated. My girl wasn’t just a pet to me, but a life long companion. She and I had been together for 15 1/2 years; we grew up together. We had moved out of home, we had gone through personal and relationship crises, we made a new home together in my current house, we kept each other company, we looked out for each other, we understood each other, and we loved each other. She, probably more than anything or anyone else, had been the one constant in my life that I could absolutely rely on. God, I fucking miss her.

It took me a long time before I made the decision to bring another companion home and then got my two boy kittens. They are affectionate, entertaining and terrifyingly intelligent. I adore them, even when they are annoying the crap out of me, but the loss of my girl still hits me occasionally.

I’ve been feeling a bit down lately and last night when I was lying in bed trying to get to sleep I suddenly thought that if my girl were here she would be cuddled up giving me comfort and company. That was all it took to set me off.

I’m not sure how long it was before I realised that one of the boys was on the bed with me. He gave my cheek a lick, laid down, put his paw on my arm and started purring. He calmed me down. 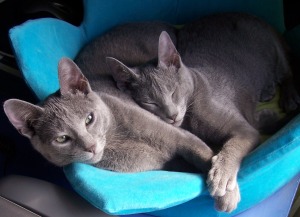 A little while later, after getting a thorough face clean as well as a cuddle from my other boy, I realised if my girl had really been with me the comfort thing would have lasted only a short time before she would have gotten up and as she was leaving given me that look which said ‘okay Kris that’s enough – time to fucking get over it and pull yourself together’. My girl could be a bossy, bitch of a friend like that.

Reads, rants, randoms & R+s. You've been warned. BTW, don't follow me if you're a GLBTQQphobic wanker. It won't end well. For you.
View all posts by Kris →
This entry was posted in me, my boys, my girl. Bookmark the permalink.

3 Responses to sometimes you just need a good cry