So I was perusing the shelves for ideas for Christmas pressies for the trillions of honorary nieces and nephews that I, as is traditional for any single woman in her 30s, have managed to accumulate and what did I see that I just had to share with the entire world… 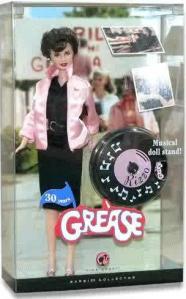 I know! How friggin cool is that!

I don’t know how but I apparently missed 2008 being the 30th anniversary of the Grease film, which is why this special collection has been released. (There is a Frenchy Barbie too!)

Besides the fact that I now feel hell-old and embarrassed, which I was trying to avoid doing to myself this week, because I squee-ed in Target, it also brought back some great memories of sleep overs with friends, sighing at how romantic we all thought Danny was, and dancing around the living room singing into hairbrushes.

I think if I was to watch it again that I would still know all the words to the songs, not to mention most of the dialogue. 🙂

Anyway, sad though it may be, I think that for the first time in my life I’ll be asking Santa for a Barbie for Christmas.

Reads, rants, randoms & R+s. You've been warned. BTW, don't follow me if you're a GLBTQQphobic wanker. It won't end well. For you.
View all posts by Kris →
This entry was posted in randomness. Bookmark the permalink.