I was perusing the recently addeds at All Romance eBooks as I do of a morning (and frequently during the day) with coffee in hand and came across the following books, which were side-by-side in the catalogue: 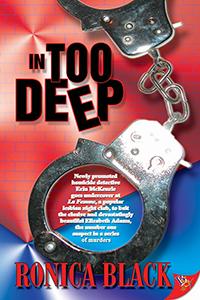 When undercover work requires working under the covers, danger is an uninvited bedfellow…

Erin McKenzie, a newly promoted homicide detective, lands the assignment of her career when she is chosen to investigate Elizabeth Adams, the number one suspect in a slew of serial murders. Adams, elusive and devastatingly beautiful, is not only an accomplished seductress but also a lesbian. Erin, straight and married, needs a crash course in more than just undercover detecting. With Patricia Henderson, a fellow homicide cop and Adam’s former lover as a mentor, Erin embarks on the journey of her life… with love and danger hot on her heels.

Former homicide detective Erin McKenzie couldn’t be any happier with her new life and her fiancée Elizabeth Adams—until the not so distant past comes knocking at the door. Erin’s former colleague Detective Patricia Henderson—a woman both she and Liz have intimate ties to—shows up with a fresh crime scene photo that looks all too familiar. The victim is an actor who works for Liz’s movie production company, and Liz had argued with the young man on more than one occasion.

Erin can’t believe it’s happening again. The new murder resurrects old questions, and when Liz all but sends her packing, Erin can’t help but wonder what her lover is hiding. Lost, alone, and frightened, Erin is once again caught in midst of it all, and no matter how hard she fights it, she’s where she never thought she’d be… deeper.

I realise some, if interested in the first book, might be enticed to buy the sequel if they appear together in the catalogue, but doesn’t somebody (ie publisher and/or bookstore) realise that they gave away the outcome of the first novel via the blurb of the second?

Question for you: would you still buy this book now that you know what happened??

Reads, rants, randoms & R+s. You've been warned. BTW, don't follow me if you're a GLBTQQphobic wanker. It won't end well. For you.
View all posts by Kris →
This entry was posted in blurbs, randomness, WTF. Bookmark the permalink.

6 Responses to a bit silly