reflections from a single chick*

Nah, this isn’t going to be a ‘woe is me I’m single on Valentine’s Day**’ post because that would be sad, not to mention boring as bat poo.

Instead, I want to talk about how I’ve decided to add yet another title to my list of descriptors.

So far, I have Queen Bitch, Super Speed Reader, Book Goddess and The Pimp. Added to this will now be…

This isn’t a play on Nigella’s ‘Domestic Goddess’, but rather a reference to all those things that I – and other single chicks – learn to do around the house besides the cleaning gig.

I mow the lawn (granted it’s more like a sand pit at the moment because of water restrictions); I do reticulation for the garden (good fun in Summer when it’s hot); I fiddle with electronic gadgets to get them working; I spray oil stuff to make locks turn and things not squeak; with much swearing I change washes on taps so that I can sleep at night; I have a handy, electric screwdriver, which every time I use I find myself growling like Tim the Tool Man; and, I’ve even been known to use a sander.

Let me tell you…

Yesterday, I fixed my toilet.

Trust me it wasn’t a vomity ‘have to’ fix because even I would pay the outrageous call-out fees and deal with butt cracks for something like that.

It was a CLEAN water overflow problem for which I braved egotistical wankers chauvinistic bastards helpful hardware store guys and carefully read the instructions to put the new floaty whatsit into the tank bit.

With a glow of satisfaction I rang up my baby brother to brag about how good I was before settling down to read a romance, eat chocolate and have a glass of red wine. 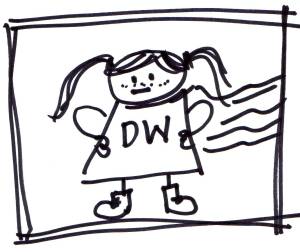 *This is not the thing I was talking about, Jen.

** I noticed a number of people referred to it as ‘VD’ for short. ‘VD’! You know in Australia after both World Wars there were VD clinics for those soldiers who got up to no good whilst overseas. Yes, that’s right, VD clinics. VD as in Venereal Disease. Made me friggin shudder every time I saw it in a post or comment today. Yuck!

Reads, rants, randoms & R+s. You've been warned. BTW, don't follow me if you're a GLBTQQphobic wanker. It won't end well. For you.
View all posts by Kris →
This entry was posted in me, randomness. Bookmark the permalink.

9 Responses to reflections from a single chick*