Posted on 18/03/2010 by Kris
Once upon a time, in a town on the edge of the ocean and in the middle of nowhere, a beautiful and totally awesome young woman went innocently to her letter box.

“Oh”, she said upon seeing an envelope prettily covered in kitty and puppy stickers. “I wonder what sweet member of my minions has sent me a love missive this time?”
Turning the envelope, she saw a name that struck fear into her pure heart.

“It cannot be…”
Preferring to think the best of people as was her wholesome wont, she determinedly shook her head, sending her long, piggy tails swinging. “I am sure that it is just someone’s idea of a joke, albeit a poor one.”
Back inside her quaint little house, she, wearing a mask and gloves, carefully slit open the now suspicious envelope.
Once she, with the assistance of her Google Fu, had determined that the white powder was nothing but harmless baby talc, she gently tipped the contents of the letter on to her plastic protected desk. 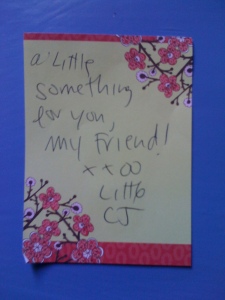 “Dear God.” Clutching a trembling hand to her throat. “It is her.” 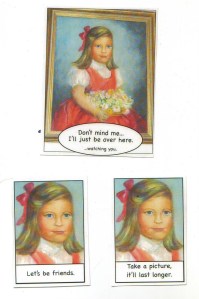 “NOOOOOOOOO!”
“How could she have found me again so soon?! Unless… I should have known that, despite the heartfelt promises, she would be unable to resist a Thai dinner.”
Sighing, the beautiful and totally awesome young woman considered her options, including the one which would see her dispose of and assume the identity of one of her faithful followers.
Finally deciding that she quite enjoyed the life she had in a town on the edge of the ocean and in the middle of nowhere, even though the cost of books was appalling due to the Federal Government’s sell out to the corporate world as well as her nearly overwhelming need to visit and set to rights a certain bookshelf in the Netherlands, she placed one of the pictures of the visually impaired little girl on the wall in her office and murmured
“If you cannot beat them…”
And she lived somewhat happily ever after with the occasional nightmare.
The End.

Reads, rants, randoms & R+s. You've been warned. BTW, don't follow me if you're a GLBTQQphobic wanker. It won't end well. For you.
View all posts by Kris →
This entry was posted in carolyn jean, chris, little cj, me. Bookmark the permalink.

27 Responses to a true story