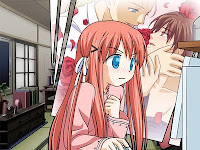 I get quite a few emails from people about yaoi and what I would recommend to those new to the genre and to those who want some good reads.

In light of this, and given the diversity of dis/likes out there, I thought it would be great to start a series where I invited fellow readers to talk about their favourite yaoi novels and manga as well as other forms of m/m graphic novels.

Much to my delight a number of people said yes and I’m pleased today to launch what I hope will be a weekly event with a post by our very own, the lovely Ingrid. 🙂

Last week I was cordially invited by Kris to write about yaoi. Right. I will get to that in a minute. First something about me. I am Dutch, 34 as of 24th June, Cancerian, bloodtype … no clue and I don’t have my own blog to ramble on so need to look for it. I started reading m/m around July 2008 and sometime last year I was asked if I wanted to read some yaoi by a certain someone. I wish I had never responded to that question! *Kris: Hey! How rude!*

Just kidding, the entertainment value of this genre is so big, it can be hilarious, touching, very smexy to the totally absurd.

After reading the first few books were I was totally flabbergasted because you have to read them from right to left (and down and across) I got hooked to the genre and started to looking out for more. So I found this site. I have spent loads of hours there reading the yaoi and looking at the pretty pictures. I noticed that I did not like all of them, some artwork just did not catch me or the story wasn’t. Like some people are raving about Tyrant Falls In Love but I got bored after one book. The artwork is ok but the rest isn’t. The one protag keeps screaming no, no and it got tiresome. Now will you think, “don’t they all scream no?” True, they do but this instance it grates on my nerves.

One of the first books I read was You’re My Love Prize in Viewfinder by Amano Yamane. I am sure this was the book that cemented my love for yaoi. The artwork is gorgeous, as all her books, the story is gripping, fast paced and sweet at times too. It has all the ingredients of a typical modern yaoi book, a stern Yakuza leader, a twinky who gets in situation he isn’t supposed to be, the bad guys and a very bad guy, its explicit and has happy ending. Although I understand that there is another book coming.

Another series that is a big favourite of mine is Okane ga Nai (No Money). I read the book and later I discovered the anime. The story is about a man, well boy who we have been told is 21 but does not really look the part, is sold at an auction by his cousin due to gambling debts to a money lender. In order to pay of his debt Ayase has to work for it, meaning have sex with his buyer Kanou. This continues for 37 chapters plus extra’s and it is still not finished. Of course this grates with Ayase and Kanou is highly jealous of Ayase’s dealings with other men and so it goes on. One thing the books has plenty of are chibi’s. These are the tiny figures of the persona. In this case they are so cute and funny.

The anime only shows the first chapters of the book but is beautifully done.

Another big favourite of mine is Junjou Romantica. At the moment I am waiting for book 9 to arrive from the Emerald City aka Book Depository. It is in anime. I love the two for different reasons. It is a romantic comedy and the comedy aspect shows much better in anime then in book form. In the books I can follow the development of the relation of these two much better. The books have the stories of three couples but I like the ones about Misaki and Usami the most.

Another book I enjoyed but not because of the exquisite artwork or story line is Animal X. It is about a hermaphrodite of some sort and weredinosaurs. Yes you read that right wereDINOs. No wolves, bears or kangaroos but dinosaurs, the T-rex type. It has kidnapping, secret biochemical companies, bad guys and love. You will be amazed about what all happens before they get their HEA.

This is yaoi after all.

Reads, rants, randoms & R+s. You've been warned. BTW, don't follow me if you're a GLBTQQphobic wanker. It won't end well. For you.
View all posts by Kris →
This entry was posted in guest post, ingrid, m/m graphic novel appreciation series, yaoi. Bookmark the permalink.