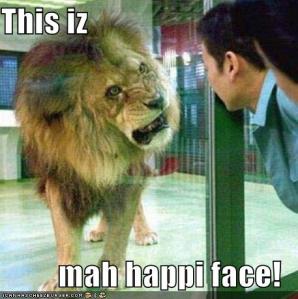 Yep, it’s time for me to get my rant on and then pretend to give a damn when everyone else does the same.
And what could have possibly upset the person who is usually such a bundle of friggin’ joy??
People.
I hates ’em.
Swear to God; Tuesday was such complete and utter shit that I think I may have actually broken the record for the number of fuck’s used in one sentence.
Yeah. Unbelievable and awesome at the same time.
The day also made me pull out and revise an old World Domination Plan from the good-idea-but-perhaps-a-wee-bit-like-the-apocalypse pile, which would see the implementation of a biological agent killing all people who piss me off.
I’ve since decided that I can live with a population on Earth of about 100 just as long as they keep to their own fucking corners of the planet.
So, not that I really care or anything, but how’s your week been?

Reads, rants, randoms & R+s. You've been warned. BTW, don't follow me if you're a GLBTQQphobic wanker. It won't end well. For you.
View all posts by Kris →
This entry was posted in extra further randomness, fuck it fridays, me. Bookmark the permalink.

44 Responses to f%#k it friday