As part of this series, I decided it would also be a good thing to include a couple of mini-reviews of different works out there in the yaoi and m/m graphic novel genres.
*sigh* Yes, I’m actually willingly doing a review.
*double sigh* No, the world isn’t coming to an end.
*mutterrudeshitsmutter*
*****
Pride High Vols 1 – 7 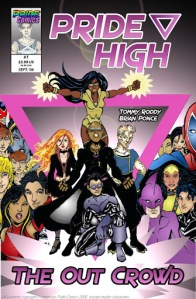 I wasn’t able to find a blurb as such about the Pride High series, but I did find the below in a 28/9/2006 press release:

Pride High is a queer-themed independent comic book about five friends and the gay-straight alliance they create at their high school for superpowered youth. A celebration of queer and queer-friendly teens, Pride High will explore racism in the LGBT community, homophobia in communities of color, and the place of young queer superheroes in a world that prefers heroes a little older and a lot straighter.

“Pride High is dedicated to all the queer and queer-friendly kids out there who have formed gay-straight alliances. They’re my heroes,” says Tommy Roddy, Executive Director of Pride Comics.

After a couple of people mentioning it, including the fact that fantabulous artist Anne Cain was doing an issue, I got intrigued enough to want to give it a read. This is when an amazing, awesome island kitteh stepped it to get it for me because Pay Pal sucks big fat hairy donkey ballz and I have a hate/hate relationship.

Dislike~ True story: I’m an impatient bitch. I hate waiting. Hate. It. At approx. 30 pages an issue, I champ at the bit for the next edition in the series. It’s not good. 😦

Like~ It may *cough* be a tad obvious *cough* however, I kind of have a thing for this medium. GIMME! GIMME NOW! *ahem* With Pride High, I particularly enjoyed the way each issue was drawn by a different artist. The artwork of some appealed to me more than others. Still, it was interesting to see how each person interpreted the characters, the story line and the world, yet maintained the connection from one edition to the next. Very cool.

Dislike~ I hesitate to say this because it may bring back snarly, ranty kitteh memories, but the digital files were absofuckinglutely ginormous and a bit of a nightmare to download. Make sure you have super duper internet capacity and time to spare if you’re going to buy the pdfs instead of going the print-on-demand route.

Like~ To be honest, it took me a little while to warm up to Pride High. However, as the story developed I definitely got more and more caught up in the lives of the main characters as well as the mystery subplot. I’m hoping the latter will be emphasised in the issues to come.

So, what I think: I found myself increasingly enjoying Pride High as the series progressed and am looking forward to finding a good minion brave enough to buy the latest editions for me. *hint, hint*

If you want to have a squiz for yourself, the first couple of issues are available as a webcomic here.

Reads, rants, randoms & R+s. You've been warned. BTW, don't follow me if you're a GLBTQQphobic wanker. It won't end well. For you.
View all posts by Kris →
This entry was posted in anne cain, comic, Emeraldjaguar, glbtq, m/m graphic novel appreciation series, pride high, tasting, ya. Bookmark the permalink.