guess who’s who: the ‘we are so fucking funny’ edition 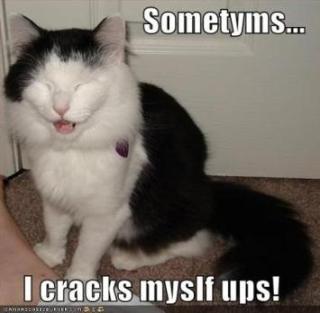 Once upon a time, there were five online friends who, quite out of the blue, decided to spend part of their day making fun of everyone including each other.


For some obscure reason, the virtual chat took a 180 to talk about the douche remarks frequently occasionally made by people at goodreads.


I know.  The online friends found this turn in the convo very odd too.


Anyhoo, the most awesomest of the five suddenly came up with a brilliant idea: “Let’s start a blog which reviews reviews!”


A hallelujah chorus was heard by all of the five and there was general consensus there was fun to be had in making people hate their guts.


When the token slave boy among them suggested they acquire pseuds for their worthy endeavour, completely low key and non-attention-seeking names were chosen.


However, prior to the ginmormous launch of their highly inflammatory anticipated site “The Shizzle: All you need to know about the review of jizzle books for rizzle!”, the five also agreed a competition should be held in order to test the anonymity of their new personas.


Yeah.  They are clearly all about altruism.


1. Match the pseuds to the online friends.
2. You get one chance and one chance only. No changes can be made once you hit that submit/send button and you certainly can’t delete it and try again. I see all.
3. No hinting whatsoever in the comments or anywhere else. If you do, I will get seriously pissed and automatically delete your arse. You’ve been warned.
4. Guesses must be received by 12noon Friday 22nd July (Perth, West
Oz time).
5. None of the five friends can play… obviously.


So without further ado… the guess who’s who: ‘we are so fucking funny’ edition!


The most amazing pseuds in the entire m/m romance universe:


I’ll bet you’ll never guess in a gazillion years which fake name is mine.  ;P

Reads, rants, randoms & R+s. You've been warned. BTW, don't follow me if you're a GLBTQQphobic wanker. It won't end well. For you.
View all posts by Kris →
This entry was posted in chris, competition, guess who's who, jason, juniper, me, tam. Bookmark the permalink.

45 Responses to guess who’s who: the ‘we are so fucking funny’ edition