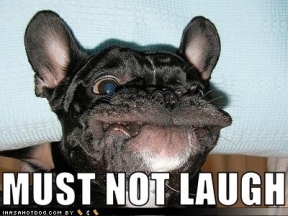 I’ve got a bunch of semi-serious to almost-serious posts underway, but, well, I just can’t be arsed finishing any of them.

Instead, I’m going to share a couple of one-liners that made me guffaw.

I thought guffawing was an urban legend too!

Next I’ll be waking up in the front seat of my car with Bloody Mary in the back and one of my kidneys in her hand.

Now I’ll have to go hunting for ladybirds, knock up a tree and draw a wobbly circle of salt.

I hate doing that.

The ladybird thing, that is.  Damn bugs scent fear and then go into hiding.

Enough of that, though.  On to the one-liners!

“He wondered for a moment if jeans had been the best option to wear, then gave himself a mental eye roll. It wasn’t as if he had a section of his closet specifically for scared-shitless situations.”  Mind Magic by Poppy Dennison.

I’ll definitely be stealing this one.  I can think of a number of occasions when this line will come in handy.  Of course, I’ll be substituting ‘scared-shitless’ for ‘looking like I give a fuck’.

“He tapped the screen and sank back against the head of the bed with a groan. Josh would make him suffer for it. At five foot four, Josh paired a Napoleon complex with hardcore sadism. If anything, that had gotten even worse after his sex change.”  Country Mouse by Amy Lane and Aleksandr Voinov.

Not a gigglesnort.  Rather an out-loud, that-was-fucking-funny-but-quite-possibly-crudely-unPC-but-who-gives-a-toss HA!  I love reading moments like this. ❤

Are you a fan of the one-liner?  If so, what’s had you almost peeing in laughter recently?

PS – And, no, I’ve no idea what’s with all the hyphenation in this post either.

PSS – I, naturally, looked it up to see if it might be a phobia I could add to my list.  Unfortunately not.

PPS – However, it did say ‘hyphenate’ could be used as an informal noun to refer to a ‘person working or excelling at more than one craft or occupation’.

Reads, rants, randoms & R+s. You've been warned. BTW, don't follow me if you're a GLBTQQphobic wanker. It won't end well. For you.
View all posts by Kris →
This entry was posted in aleksandr voinov, amy lane, awesomeness, book rofls, books, fucking funny, words. Bookmark the permalink.

23 Responses to the guffaw