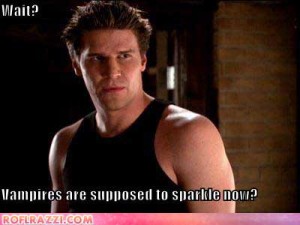 Forgetting the fact that I am expecting two more books from a previous order at The Book Depository, that I just ordered 7 yaoi manga during their sale, that while I was at the Mumma’s yesterday I snitched a YA from her teacherley carton of ‘let’s see what class sets of books we can order’ and that I forgot I was participating in a someone-else-pick-a-book-for-me challenge, I proved myself to be an awesome tbr slayer over the weekend by killing dead 8 (including the one stolen from the Mumma) print books. Yay me!!!
Granted I’m likely to only hold the position of tbr slayer (very) temporarily, but still…
I AM SO FRIGGIN’ AWESOME!!
Did I mention that I also picked up a book whilst shopping on Saturday?? Umm, let’s just forget that one then, shall we…
I AM STILL FRIGGIN’ AWESOME!!!

Reads, rants, randoms & R+s. You've been warned. BTW, don't follow me if you're a GLBTQQphobic wanker. It won't end well. For you.
View all posts by Kris →
This entry was posted in extra further randomness, me, tbr books, the book depository. Bookmark the permalink.