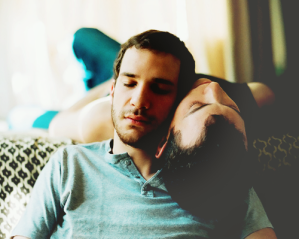 Val of Obsidian Bookshelf did a great post the other day about writing m/m sex scenes between two or three partners and the difficulty of using the one pronoun.
This is so very true. I mean, how many times have you read a story and thought to yourself ‘I’ve no friggin’ idea who is doing what to whom!’? It can sometimes be very confusing.
One of the ways that authors deal with this issue is by using descriptors like ‘the other man’, ‘the older man’, etc.
I made the comment that I don’t like those which seem odd within the context of a sex scene. For example, if the descriptor is ‘the lawyer’ or ‘the mechanic’ it throws me out of the story because I always wonder what the hell their profession has to do with them fucking.
Later, I remembered something else that jarred me when I was reading a m/m last weekend. This was the descriptor ‘his lover’ and it was used during the first sex scene the characters had together.
To me, the word ‘lover’ indicates a certain level of intimacy and/or history between two people which is more than just their first encounter.
Obviously this will depend on the level of connection between the characters that the author has been able to convey as well as the context of the scene itself, but using ‘lover’ in circumstances other than these just doesn’t work for me personally.
However, maybe I have a narrow interpretation of the word?
I’d be interested to know what you think.

Reads, rants, randoms & R+s. You've been warned. BTW, don't follow me if you're a GLBTQQphobic wanker. It won't end well. For you.
View all posts by Kris →
This entry was posted in m/m, maybe it's me but, obsidian bookshelf. Bookmark the permalink.