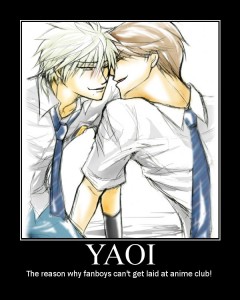 I seem to be talking about yaoi a lot lately; both on and offline, so I thought it would be a great idea to give people a dedicated post for sharing their favourite books, authors and artists with other readers.
I’ll start then, shall I?? These are a couple of the books firmly on my keeper shelf:

Totally Captivated series by Hajin Yoo
Technically this is manwha (Korean version of yaoi). I would strongly recommend to anyone that they read past the first book otherwise you might be left scratching your head. The second book will have you hooked and, by the time you close the cover on the sixth, you will be completely satisfied albeit sorry that it all had to come to an end.

The Crimson Spell series by Ayano Yamane
Best. Fantasy. Yaoi. Ever!! She’s going to be at Yaoi-Con! *SQUEEEE* Seriously, though, for those of you who love their stories with adventure, magic, quests, powerful and sexy wizards, honourable but cursed heroes, and nasty bad guys then this series is definitely for you. It’s bloody terrific.
So tell me… what are your faves? 🙂
PS – Don’t forget that if you’re curious about The Great Yaoi Swap you can just email me to find out more. 🙂

Reads, rants, randoms & R+s. You've been warned. BTW, don't follow me if you're a GLBTQQphobic wanker. It won't end well. For you.
View all posts by Kris →
This entry was posted in ayano yamane, giveaway, hajin yoo, yaoi. Bookmark the permalink.