I had hoped to have another of my tastings or a guest post ready for you today, but unfortunately my life has been a bit blechy the last couple of weeks and I’m ill-prepared.
Instead, I decided to share some of the yaoi cookies which I’ve been collecting specially for a rainy day.
For those unfamiliar with the genre, they just might give you a sense of what some of the artwork is like, not to mention how explicit it can get. 😉

This first image is from Wild Rock by Kazuza Takashima.
Talked about by Mary Calmes in her guest post for this series. 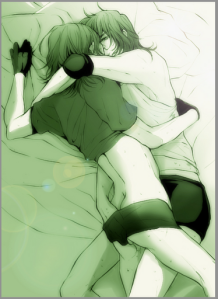 Reads, rants, randoms & R+s. You've been warned. BTW, don't follow me if you're a GLBTQQphobic wanker. It won't end well. For you.
View all posts by Kris →
This entry was posted in cookies, m/m graphic novel appreciation series, pretties, yaoi. Bookmark the permalink.