The fantastic Melissa has allowed herself to be talked into an interruption in her busy, busy life to write a two-parter post for the yaoi series.

There are a heap of great recs here including some anime, which, even though they’re not technically reads, I will allow Melissa… since they’re so pretty and all. 😉

When Kris emailed me to see if I wanted to contribute to this series, I pondered what I could write about, how I could write it, and how to make it interesting. Unfortunately, (for you ;p) I just completed 6 years of college so my mind is set on reports and research papers… So be grateful that I am currently a headless chicken and didn’t have the time to go as in-depth as I wanted to (in other words, yes this could have been much longer).

To begin let me properly introduce myself, my name is Melissa and I’m presently live in Texas, I’ve been reading all types of m/m fiction since 2004, which included yaoi and even took four semesters of Japanese in collage in order to read native manga (Actually, it was either Japanese or Spanish and I failed Spanish in high school…).

Now when I started reading m/m fiction I had to stumble my way across pretty much everything. I would have loved to have a general overview of what was what. What I learned was that just like any book genre there are many sub-genres, and this applies for manga as well. The genres cover everything from sci-fi/fantasy to school boys; therefore, you have to browse around to find your faves 😀. So, I decided to take a little format from this mindset in order to present a Short Beginners Pamphlet and a Small Pervs’ Guide to Japanese based yaoi, shōnen-ai, dojinshi, etc. [snicker]. Also, I thought I could provide a couple of good websites to visit for both yaoi manga and anime, and a very small sampling of my favorites [that someone else has not covered].

Therefore, in order to provide basic information for future m/m enthusiasts I present to you…

“Manga Geared Towards Women or (MGTW)”

Ø Yaoi- The term yaoi is actually an acronym from the words yama nashi, ochi nashi, imi nashi (やまなし、おちなし、いみなし) “no climax, no point, no meaning” or Plot What Plot. It is a “catchall term for any manga [or novel] or anime that includes suggestive situations between male characters.” Though, most Westerners tend to view anything with the word yaoi in it as sexually explicit and are quite bummed if it’s not. My favorite yaoi [not already listed] are:

1. Yellow- One of the first series of yaoi that I acquired. Beautiful artwork and a decent story. 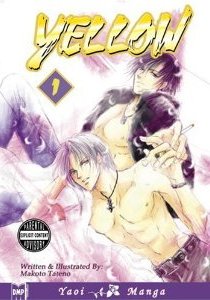 Straight and macho Taki partners with feminine and gay Goh to form an expert team of bandits hired by the police to steal from the mafia. Lately, Goh has been more interested in acquiring Taki’s feelings than the usual caches of arms and drugs. Will Taki and Goh form a new kind of partnership? Volume one of Yellow begins with a brewing personal interest between Taki and Goh, though Taki is still unwilling to answer to Goh’s desires. A gangster’s jealousy leads to Taki’s kidnapping, and it’s up to Goh’s cunning and charms to save him. Working solo, it’s also up to Goh to find the drugs he was hired to steal while sidestepping a police conspiracy powder keg.

2. Kizuna- I was completely bummed when the American publisher stopped printing this. Great story, but only in English up to volume 9, the rest you would have to read as a scanlation. 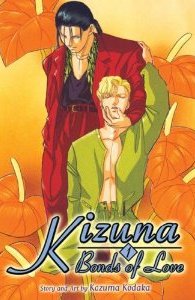 Three’s a crowd. Ranmaru and Kei have a strong and passionate relationship built on years of trust, sacrifice and love. When the mysterious son of a Yakuza boss starts to have designs on Ranmaru’s affection, tempers flare, and hidden emotions rise to the surface. Will Ranmaru and Kei’s love for each other be able to survive this difficult test, or will the emotional conflict finally come to a head? Will come shrink-wrapped and carries an 18+ age advisory.

3. Love Is Like A Hurricane- In my eyes mostly a PWP yaoi, but still pretty 😀. There are five volumes. 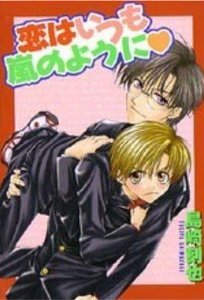 Poor Mizuki has the worst luck. Gifted with beauty that rivals most females, he finds himself defending his honor in more ways than one. When he gets molested on board a train for school one day, he starts to think things can’t get any worse. That is until he is called into the student council office by the president, Azuma. Turns out the perpetrator of that morning’s foray is none other than the student council president himself! Azuma is not one for one night stands and begins his campaign to make Mizuki his own.

4. I Can’t Stop Loving You- I’m an unrepentant Fantasy/Sci-Fi lover, so these two volumes were just my cup of tea. 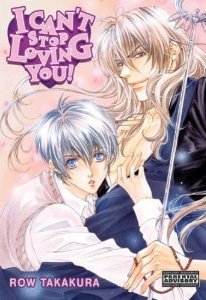 Kris: Look, Tam! It’s the pointy thing you like so much! *beams*

Kyouji is a Buddhist exorcist, although he can’t see ghosts, his best friend and lover, Yu, can! Maybe they’d go all the way if Yu’s incredible supernatural strength could be held in check. How can a steamy, sexy relationship survive such obstacles?

Though yaoi novels are just that, most do have some type of drawing panels inside them. I enjoy novels as much as manga, but it was a surprise when I ordered my first one…I thought it was manga when I ordered it!

1. Dark Walker- A good fantasy novel and I love the drawings as well. 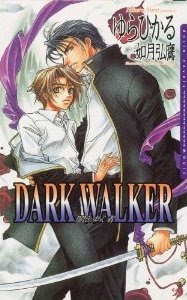 Tomoki Naruse has just started his freshman year in high school and, as with all healthy, young men at his age, he’s been dreaming of sex. But Tomoki isn’t having normal wet dreams like his classmates! In his nightmares, err… dreams… his partner is a man – and to make things worse, Tomoki is on the bottom! Aside from Tomoki’s unsettling dreams, high school life is fun – especially with his new, handsome, best friend Yugo Oda. But Yugo is no ordinary freshman – he’s involved in mysterious activities that Tomoki can’t even begin to imagine!

2. Selfish Demon King- This one was cute in some places and kind of silly in others. But it was good for a “down time” read. 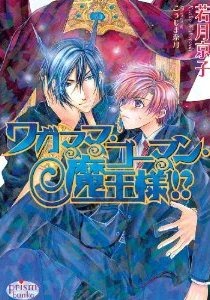 Shizuku is an adorable and spunky high school student, but even he doesn’t know the secret he’s hiding. When Shizuku comes home from school one day, he’s met by a stunningly beautiful man. This paragon of exquisite beauty, Doga, the king of the magical realm, tells Shizuku that his true nature is that of a sexual mage!

3. Secret Moon- I really enjoyed this one! It has a vampire… kinda. 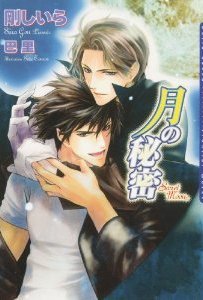 While enjoying the cool Yokohama night air, Viscount Akihiro Sanders Tomoe met a wild man, whose eyes burned like fire. Intrigued, he invited the young man back to his home.

Nearly a hundred years ago, a spurned lover ended Tomoe’s life. Madame had given him new life, but this gift was not without its limitations. Living again in Japan after an extended time abroad, Tomoe was on the prowl for a new lover. But he may have gotten more than he hoped for in young Taichi Yamagami. A young man with abnormal strength and eyes like fire, he awakened sensations within Tomoe that he had never felt before. But this young man was hiding a secret of his own. Influenced by the ebb and flow of the moon, he could be a sweet, naive intellectual, or a rough, demanding lover. Tomoe has never had a lover quite like this… what kind of man is Taichi?

Yes, I know…this is supposed to be about “reading stuff”… but anime gives pretty pictures too and you can read subtitles! Plus, many of the most popular yaoi manga has been made into anime or vice versa.

1. Sensitive Pornograph- This anime has six stories and if I remember correctly out of the six five had good sex scenes. 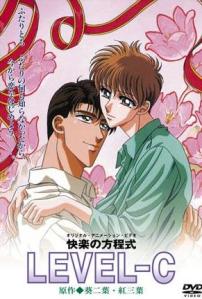 Kazuomi, a single middle age businessman who just was dumped by his girlfriend meets a beautiful and a bit gullible boy Mizuki. Entranced by Kazuomi, Mizuki accepts him to live with him in his appartment so Kazuomi decides to pay back his kindness by giving to him with his body the highest pleasure.

3. Sex Pistols OVA -Called Love Pistols in the manga format and it is a very good fantasy yaoi manga! In fact, I think the OVA makes more sense if you have read the manga- Though the manga isn’t even done in Japan yet. Of course the 1st OVA isn’t as graphic as the manga is 😀.

Description about the manga series-


People are starting to act very odd around Norio. This average boy is suddenly getting a lot of unwanted romantic attention–and he just can’t figure out why! A fall down the stairs into the arms of a handsome stranger sets off the beginnings of an explanation, and it is one Norio never could have possibly imagined. Soon a whole new world opens up for Norio, revealing a secret society of special people evolved from animals other than monkeys. This society has a complex structure and its members are ranked by rarity and desirability, and it turns out that Norio is a particularly rare breed and his DNA is in much demand! How will he survive in this modern jungle where he’s suddenly the prey?!

*Cough* Ok, since this is so long… I’ll break it up and send another section next week!

All product descriptions are taken from Amazon.com.

Reads, rants, randoms & R+s. You've been warned. BTW, don't follow me if you're a GLBTQQphobic wanker. It won't end well. For you.
View all posts by Kris →
This entry was posted in guest post, m/m graphic novel appreciation series, melissa, yaoi. Bookmark the permalink.