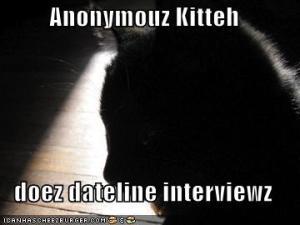 As chance would have it, at the same time I was talking very sensibly on the matter of an alpha wanker, the creator of said selfish prick (fyi that would be Josh Lanyon) made mention of an upcoming interview with the glorious Adrien English and… that other one.
He then invited people to suggest questions for the interview and a few *hundred* readers did exactly that.
My fondness for the arsehole being well known, several people said that I should particularly be involved in the process.
Receiving several invitations to take part, I meandered on over and, whilst analysing the suggestions, came to a rather stunning idea *even if I do say so myself*…
That I should be the one to interview the bastard and make him curl up in a ball and cry like the little girl that he is Jaketard.
Of course, I suggested as much to dearest Josh and he said that he would consider it and get back to me!
That’s almost a done deal!
If you also believe that I should be the one to interview Jake, please leave a comment here *and not at Josh’s cos you might get me into trouble, but I s’pose it would be okay to bombard him with emails. Actually, no, that’s probably a bad idea too.* to indicate your support.
Many thanks in advance.
K.

Reads, rants, randoms & R+s. You've been warned. BTW, don't follow me if you're a GLBTQQphobic wanker. It won't end well. For you.
View all posts by Kris →
This entry was posted in Josh Lanyon, me, pet peeve/fave rant. Bookmark the permalink.

16 Responses to ps: everyone agrees