the jury is in…

Me, in my defense: Granted bitchiness is one of my dominant personality traits; however, I generally have to try (a little) to piss people off. Therefore I’m blaming the inability of the internet to effectively transmit my sarcastic (yes, another trait) tendencies.
2. Crappy book recommendations. 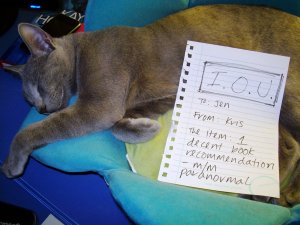 Me, in my defense: Well, I liked it. Yeah okay, maybe I should have warned Jenre that people usually take anything I say/recommend with a pinch of salt… in fact, what the hell was she thinking listening to me anyway?! I’m crap at giving advice.
3. Being a bad mother.

Me, in my defense: I got nothing. Why??
This morning I woke to discover the remains of a straw necklace (see an eg below) which my baby cousin made me some years ago. Because I don’t actually recall seeing it for a while (ie before Christmas) it appears the boy kittens have been systematically eating it for some time. 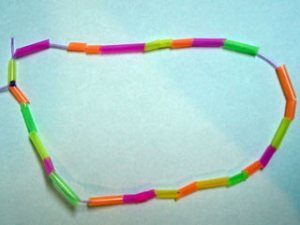 Picture me this morning with a torch in my hand peering under couches and the other dark and dusty places trying to find pieces of said necklace, and then attempting to calculate exactly how much was missing.

Yeah, you may well laugh, but now OCD Kris is obsessively watching the litter tray to make sure all is alright with little tummies.

I think I just failed the parenting test in a major way. No wonder I rarely get asked to babysit the multitude of honoraries!

Reads, rants, randoms & R+s. You've been warned. BTW, don't follow me if you're a GLBTQQphobic wanker. It won't end well. For you.
View all posts by Kris →
This entry was posted in book pimpage, I suck, Jenre, my boys. Bookmark the permalink.

8 Responses to the jury is in…