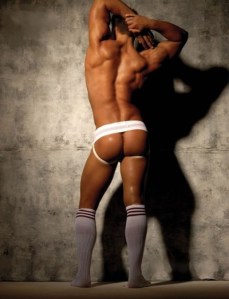 *pats bubble butt*
Is there any point in giving three guesses as to who is going to eww on this firsts topic, which is, if you hadn’t already guessed, about jock huffing?
For those of you who’ve no idea what the hell this is go here for a very thought provoking and insightful post on this kink by LB and CJ.
Confession time. I’ve never actually read the Bobby Michael’s stories that apparently made this subject infamous. (PS – I’m planning to rectify this asap. There’s a saying about curiosity, smutting and Kris. Good times. 😉 )
The closest I’ve come to reading about jock huffing was in J L Langley’s The Englor Affair. There’s no doubt that the sex scene between Payton and Simon was hot as fuck. Still, the thought of having a used jock stuffed in your mouth may be a leetle bit of a turn off for some, especially certain gals from Texas.
So, what do you think about this fetish?
I s’pose I may as well also ask how many of you are doing fangirly squees at the thought of the third Jock Dorm book coming out, but I think I’ve already got a pretty good idea as to who you are. *Lily… EH…* 🙂